Written and illustrated by Jack Kent

Volume Two reproduces more than 700 sequential strips that have never been reprinted. It’s a rare chance to see why King Aroo is considered one of the medium’s hidden gems. Plus the continuation of Bruce Canwell’s groundbreaking biography of Kent’s life and career.

An amazing comic strip, as awesomely clever a piece of idiosyncratic genius as comics has ever produced. The world of the title character is filled with puns, silly creatures, surrealistic plotlines, funny characters, and meandering stories that almost seem to bob and weave around the whole idea of having a coherent narrative. It’s also funny as can be. —Jason Sacks, Comics Bulletin 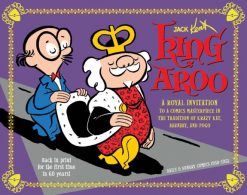 $39.99
Copyright 2023 © Library of American Comics LLC. All Rights Reserved by LOAC and its respective Licensors.